How to set dynamic values for Field choices’ human-readable names

In this post, I explain how to add dynamic data to the choices shown in a Django form dropdown.

If you'd like to skip to the implementation, head down to the feature request section below.

I was building an email blast feature in a client project. I won't go into the implementation of the email queueing system itself for now - we'll focus on the email blast model, which looked initially roughly like this:

We use a simple CreateView to create the blast with the chosen recipients:

...which renders with a nice dropdown that looks like this: 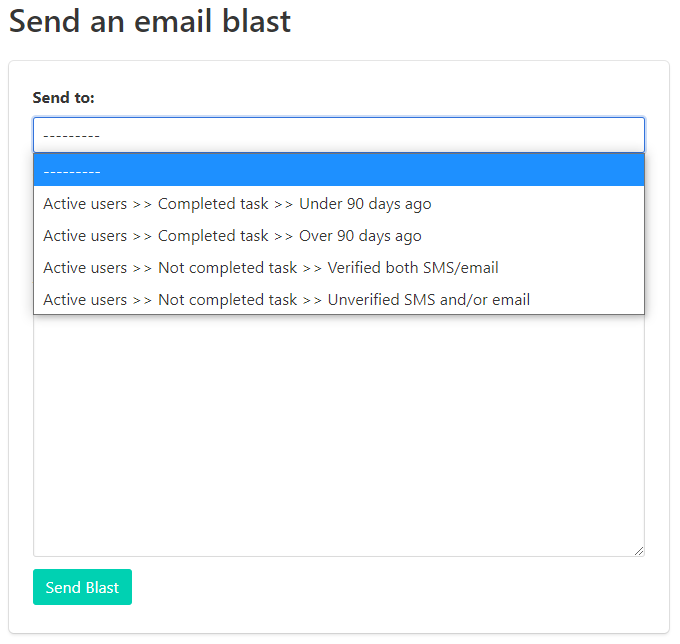 My client wanted to have a sense of how many people would get an email when they submitted this form. My first thought was to override the get_FOO_display method on the model (see Django docs), but that only works for instances of the model, and in a CreateView, we don't yet have an instance.

My next idea was to simply modify the string representations directly. However, as Django technical board member Adam Johnson helpfully pointed out to me on Twitter, this code would be executed at import time, so the counts would only be updated when restarting the web server. Adam actually opened a Django ticket with more explanation. You can read it here.

It turns out, perhaps unsurprisingly, the best place to adjust the choices displayed in the form is in the Form class itself. This means we actually have to create a form, rather than letting Django create the default one for us.

Note we use the handy django.contrib.humanize template tag intcomma to format the numbers for us. We could of course do this ourselves with a number formatter. Also note I’m using methods I’ve defined in the User model manager. These segments are used throughout the app so it’s best to write the query logic only once. Finally, we use a helper method to append to the field's choices. Note the assert statement. You should probably do this in a unit test, but I've included it here to underscore that we need to make sure this helper method is changed if the model field's choices change.

Lets update our view to use the new form. 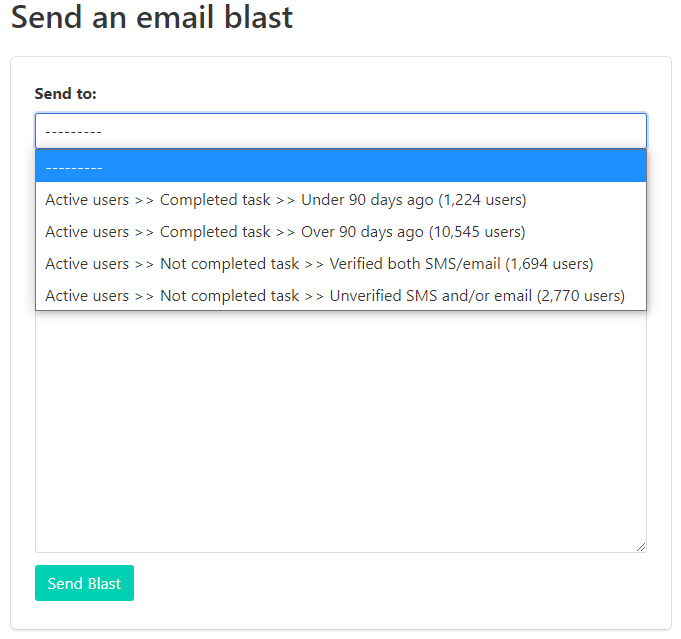 Success! It's important to note that with this implementation, there is a race condition: we are simply displaying the counts in the form, but those counts could change between loading the form and submitting the form. In this case it doesn't matter, since the client was just looking for a general idea of the size of each group, but depending on your use case you may need to be more careful.